For much of the time here I try to integrate with Lyonnais life: I speak French whenever I can; I respect their customs and food; I learn about their heritage and history, I drink their wine, I see their sights. However, on Saturday nights I become English again.

Once a week I need to remember who I am; shake off the pretence. Like I wrote a few years ago after living in Spain, it’s very hard to change your nationality from the inside. You can hold the passport, put on the clothes, speak the language, but can you change who you are. ‘Even if I dug a hole in the middle of Madrid and lived in it for 40 years, I would never become Spanish,’ I wrote.

One of my students said to me shortly after I arrived, ‘You’ll never become French.’ I’m not sure whether he was simply stating a fact, or being patriotic, but by all accounts he was right.

As I do not act like the classic expat (egg and chips, copy of The Sun, cup of tea), I have no problem, almost the right, to wander down to the Smoking Dog pub on a Saturday evening to watch the football. It’s not a stupid themed Irish pub with Bodrans hanging off the wall and Guinness adverts everywhere; it’s fairly nondescript: bar, few tables, stools, beer. If you’ve ever been, it’s not too dissimilar to the Vernon Arms in Nottingham where I spent most of my twenties.

It serves beer and shows football but the split between French and non-French is pretty even. As I found in Spain a lot of locals prefer the Irish/UK style pubs to their own bars. Not because the beer is any better, but because they discovered they could get drunk without anybody caring. ‘Almost expected’, my Spanish friend once said to me. It’s not our greatest export, but for the French it must be a joyous experience to get away from the glaring, judging eyes of the French bar owner. Here you could piss in the landlord’s mouth and he would simply laugh it off with a gallic shrug, ‘Ah, the great English sense of humour.’

I meet my French friends here sometimes, although buying a round is often financially dangerous as they all drink Hoegardenn. I only came here originally because my colleague told me that Stella is only 4 Euros a pint. Which is an absolute bargain for Lyon. Hoegardenn on the other hand is 8, so I try to time my rounds to when they go to the toilet or out for a fag. ‘Oh, did you want another drink; sorry you should have said…’

If I’m on my own I sit at the bar and watch the Saturday evening match and chat with the ‘locals’ – Dom, Ken, Mike and Charles – who never leave. Not once have I been here when they haven’t been propping up the bar. Bottle of wine for Ken, pint of Stella for Dom, half a Hoegardenn for Charles and a pint of Guinness for Mike. Mike’s a jovial Spurs fan who I like. Except when Spurs are playing. Then he gets pissy if you talk to him. Apart from that, he’s the one I prefer to speak to. The rest are just expat drunks. Moved to France to sit in an English pub and watch football all day. Nice one lads. You could have gone somewhere warm.

However, I do enjoy coming down here. Reminds me of when my father used to play hockey and after the match the team would go to the club bar for chilli and chips and pints of lager to watch Final Score. It’s homely and informal. You can chat with the guys or not; it doesn’t matter. They don’t take offence if you want to be on your own. Not that they’d remember if any offence had been given – ‘Hey lads, what year are we in?’…shake of heads all round.

In any case my Saturday trip to the pub isn’t without a cultural element. Located along Quai de Bondy on the banks of the Soane are about twenty second-hand book sellers vying for trade among the shopaholic Lyonnais. It gives you a sense of how books over here matter more than in the UK. I don’t have any figures but just the number of bookshops around the city says it all. I’m not saying the French are bigger readers or have an intellectual advantage over us Stella drinking Brits – we didn’t produce Orwell, Ballard, Dickens, Shakespeare by fluke –  but the book still has a huge significance here. For the time being anyway. I did see a Kindle the other day.

Back in the Dog it’s 2-0 to Sunderland and Ken’s got his head in his hands. He’s an Arsenal fan. I generally stay for two pints and then disappear to avoid the temptation of an all night session with the guys. A few weeks before Christmas I joined them in a boozy evening and paid heavily the next morning. Not because I’m not used to drinking but I know from my youth that three or more pints of Stella is a serious health risk. That’s what we used to drink in the Vernon all those years ago. Me and Stan ordering three pints each on the cusp of closing time and having twenty minutes to down the lot before Patrick, the red-faced ex-copper landlord, kicked us out. He used to sell Kronenberg but stopped selling it in protest when the French stopped buying British beef, or something like that. With the bitter on offer undrinkable – Riding Ale from Mansfield – we were forced to drink Stella. When I woke up here after my night out with the guys, I was waking up back in Nottingham on Gregory Boulevard reaching for my super strength codeine, my friend Dave got from his doctor to treat his cancer, to numb the pain in my head.

I wait until the end of the game, bid farewell until next Saturday and start the pleasant walk home along the Soane. Whether it’s the beer, the football or the pub, I always feel mightily reflective as I saunter back. Being in there for a few hours makes me long for home and all things English. I suppose it’s normal; we always have a desire to go back to where we’re from. The fully grown man wanting to be warm and safe, suckled with beer and chilli watching the football with dad just like the old days. Thank God for the Smoking Dog. 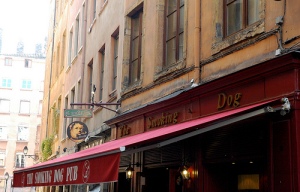