In 1984 Frédéric Moreau was three times French amateur cycling champion, and towards the end of that year signed a professional contract. However, shortly after, he started having problems with his right knee. Instead of recuperating, ready for the start of next year’s professional season, he continued to race in the remaining amateur events of that year. At the end of 1984, and in great pain, he finally went to see a doctor who told him that if he ever wanted to cycle again, he was to stop immediately: his cartilage in his right knee was torn to pieces.

Frédéric Moreau is sitting opposite me now telling me his story. I’ve been teaching him every Tuesday and Thursday morning for the past four months and while I knew he was an exceptionally keen cyclist, this was something entirely unexpected. A truly tragic sporting story that has left me numb.

Just before he turned professional in 1984, the cycling press touted him as the next big thing. He would have certainly competed in the Tour de France and could have perhaps won it, or at least won a few stages. But as he said to me this morning: ‘I’ll never know.’

Even now he finds it very difficult to speak about and I’m honoured that he is even telling me. Everything he had dreamed about had been blown away in less than a minute. He remembers the day in the doctor’s surgery as a young man embarking on a glorious cycling career being told, that in effect, his career was over. When he eventually got back on the bike two years later, it was too late. Fred never cycled professionally.

However, being naturally motivated, he retook the accountancy exams he had half-arsedly done after leaving school and eventually found a job as an accountant. Now 51, he still competes in national championships and loves the sport that almost destroyed him. He has a good job, a nice house, a great family. ‘But’, he says towards the end of the lesson, ‘I sometimes think, especially when I’m with my old cycling friends, what might have been…’ 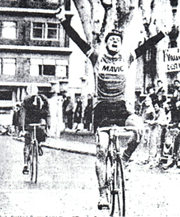 Fred winning the Boucles Catalanes in 1984

One thought on “28 – Frédéric Moreau”