Segways aside, Lyon boasts a remarkable variety of bikes. I’m sitting by the Rhone eating a salami filled baguette that tastes of sawdust watching a tandem slip past. But this is no ordinary tandem – this is a Lyonnais tandem. The front section is occupied by a woman lying on her back half pedalling, half sunbathing while her husband sits behind steering and taking up the slack. It’s quite weird but the novelty is quickly overtaken by a pair of men dressed in suits cycling back home from work on unicycles. Not normal, but not totally unusual either.

It’s a joy to sit by the Rhone enjoying a snack watching these contraptions drift by and think about a world in which there are no cars. I say this because with the spring comes the pollen. And pollen and pollution don’t mix that well. Like whiskey and red wine. Both leave you immobilised with bleeding eyes and a head stuffed with nails.

I’ve never really suffered from hayfever, but this week has been one punctuated by coughing, crying, sneezing and swearing. I personally thank the clown who sixty years ago decided to line every street with Platane trees. They were favoured because they are resistant to pollution, disease, drought, flood, hurricane and nuclear attack. Almost indestructible. Unfortunately, they’re gigantic pollen factories that have been showering us with their toxic load for the past few weeks. It’s nothing short of chemical warfare and I’ve been thinking of writing to the Pentagon. Unleash a plane load of this stuff over Iran and the Ayatollahs will soon come running out of their nuclear bases. ‘Please, anything, carpet bombing, assassination, land invasion, but not Platane pollen.’

I realised that my strange illness last week was not caused by some rogue virus but by the pollen. It got to a point on Monday afternoon where I thought my eyes were going to pop out of their sockets. Such a shame, as I’ve been waiting for the spring for so long and now feel nervous about going outside. Luckily, it’s not just me. Half my students this week have had yellow bile pouring from their eyes and sneezing into blood stained tissues. ‘Best thing is to head to the mountains,’ one of them told me in a tone that sounded like we were indeed under attack.

It’s worse this year due to the lack of rain, hot weather and wind. Mix in a million exhausts and it’s a recipe for swollen eyes and burning throats. The perils of city living. Not content with crime, robbery, mugging, deprivation, it always finds time to throw something else at you.

I bought some tablets but they must be made by the same company that produces Mister Doom. Taking one made me feel like I had just dropped acid. I was walking to my class at Egis Rail when the road started melting and everybody changed into daffodils and tulips. The man who sells Churros on the street corner of Rue Garibaldi and Mazanod was now Mr. Benn juggling brightly coloured sugar-coated sticks. When I greeted Monsieur Loraux at his office, I introduced myself as King William XIV. Luckily the effects wore off pretty quickly and I was able to get on with my lesson. Albeit floating somewhere in the Andes.

The only thing to do with hayfever is to stick it out and let the body do its bit. Although at the moment my body doesn’t feel like rallying round and putting in a shift: It’s saying: we’d like to help out, but you know what, we can’t be arsed, so you’re going to have to suffer. Maybe that’s age.

You forget how efficient the body is most of the time. You get up and move into your day without thinking that it might break down at any time. One little grain of pollen disrupts the whole flow. Put it this way, wherever I end up next year, I’m going to check what type of trees form the backdrop to their boulevards. Warning: this city contains Platane Trees. If you are thinking of coming here for a spring break. Forget it, unless you want to spend you’re entire weekend crying into your pillow or tripping your tits off on Mister Doom allergy capsules. 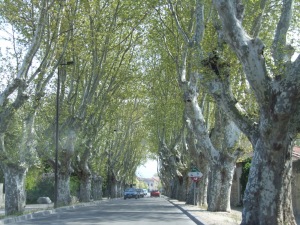