The Palais Gallien Amphitheatre half a stride away from the Jardin Public is one of the oldest looking things I’ve ever seen. A two thousand year old crumbling ruin built from what looks like broken biscuits stuck together with chewing gum, it’s no wonder the Bordelais call it le vestige – the relic.

I found it by accident yesterday on the way to my French course. I’d heard of it naturally – I’m a self confessed amphitheatre buff – but hadn’t as yet taken the time to discover it for myself.

It was therefore a welcome surprise to see it loom into view as I ambled down Rue du Docteur Albert Barraud on the way to my lesson. I say loom into view. That’s a bit dramatic. It doesn’t really loom at all. More slowly emerges from behind a clump of trees as you walk towards the site. The majority of it having been knocked down and built on during the 16th and 17th centuries.

It’s an eerie place, so it didn’t surprise me to learn later that over the centuries ‘le vestige’ has been associated with sorcery, the occult, UFO sightings, and prostitution. It reminded me of the mysterious graveyard at the top of the Forest Recreation ground in Nottingham that I used to live near when I was a student.

One night, bored with revising for a microbiology exam the next day, I wandered down into the catacombs to see if I could see any ghosts. I didn’t. Just a load of guys and girls larking about.

Being incredibly naïve, I asked them what they were doing. Perhaps thinking they were lining up for a game of hide and seek.

‘What does it look like mate?’ a guy replied on hearing my private school accent. ‘Playing a game of Fives. Spot of cricket? Tiddlywinks?’

I was just about to ask them if I could join in when I remembered my friend telling me something about that area of Nottingham being called The Red Light District. Something to do with men paying women for sex. It sounded scary so I said I had some homework to finish and ran back up the path to my dormitory, I mean student house, and went to bed pulling the sheets over my head to keep out the demons.

Luckily, there were no wizards, witches or prostitutes at the amphitheatre; just a couple of guys on a bench drinking beer and shooting the breeze.

I stood there for about fifteen minutes trying to understand them seeing as I had now missed my French class. Something about ‘My sister’s husband best mate acquiring a job lot of screw fixings for a bargain basement price.’

But I probably got that completely wrong and it was more along the lines of, somebody’s best mate screwing somebody’s sister (or husband) in a basement. I didn’t ask.

The amphitheatre here in Bordeaux doesn’t have the scale and grandness of the one in Lyon or the elegance of the one in Chester. Yet this decaying sliver of antiquity in the heart of neoclassical Bordeaux is enough to keep me going for a few years. Even if there isn’t much left. 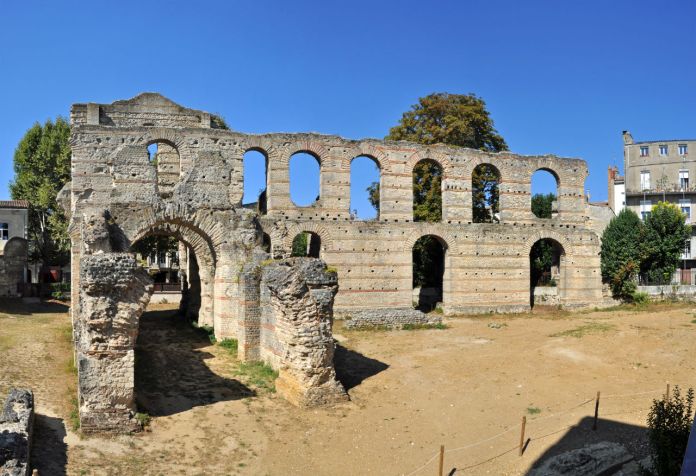