Le Grand Meaulnes is a novel written by Alain Fournier and published in 1913.

It’s been on the living room table for months now, staring at me like the porcelain geese on the mantelpiece do when I’m trying to write something important.

I picked it up a few weeks ago. But put it down again when I read on the back cover that the author had been killed in action in 1914 and that this was his only novel. I simply couldn’t bring myself to read it.

I knew it was a great book – it had been recommended. But for some reason, I couldn’t face it. To read a book whose author had been killed so soon after being published. I didn’t feel worthy.

Yesterday though with the rain hammering on the window like it wanted to come in for a cup of tea, I finally started it.

It tells the story of a schoolboy called Augustin Meaulnes who after running away from his boarding school encounters a mysterious country house and a beautiful woman within it. After his return a few days later he tells about his adventures to his best friend François (the narrator of the book) and his promise to return there one day to find her.

It’s set in the bleak landscape of the Sologne in north central France, which as it happens isn’t too far away from the farm in Queaux where I lived last year. And from Fournier’s description of life there, especially in winter, ‘the loneliness of winter’ he writes, the novel could have easily been set in Poitou-Charentes, instead of 200 kilometres north-east towards Vierzon.

I haven’t read a novel since I came to Bordeaux. Which is unusual, as I always have a book on the go. But for whatever reason, I simply haven’t felt like reading. Novels anyway. Lots of French magazines and newspapers. But no novels.

The other reason might be that, apart from an architecture book on Bordeaux written by my landlord, it’s been the only book in the house. Not much of an excuse I know seeing as the Librairie Mollat in the city centre – the biggest independent book store in France – has an enormous selection of English language books. But sometimes I suppose the football pages of L’Équipe are enough.

I read half of Le Grand Meaulnes yesterday and then put it down. It’s one of those books that’s too good to read in a day. I want to make it last. That’s why I wrote this blog. String it out a bit.

Because after this, that’s all there is. Very sad. 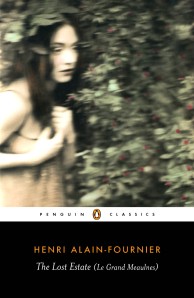 ‘…once a man has taken a step in Paradise, how can he afterwards get used to living like everyone else?…’