I was going to write a blog today about my new bike. A 1985 gold Peugeot PK10 ‘Record Du Monde’ in almost perfect condition that I bought from a guy down the road for the princely sum of 50 sheets. But then I saw the attacks in Paris.

France is a great country. I’ve lived here for four years and continue to do so. I’ve never been scared to walk the streets and will continue not to be. However, I was in a cafe today in Montauban, a town 40 kms north of Toulouse, and for the first time in my life, felt that these things do not just happen to other people, they could actually happen to me.

‘This is real,’ I said to Elizabeth.

It’s unlikely to happen in Montauban, because Montauban, with all due respect to Montauban, is off the map, but if people can waltz into restaurants and concerts in Paris, they can do it here if they want to. Which is probably why I like living in the middle of nowhere. Just in case.

I’m not particularly political, but I do understand that the reasons for these problems go back many years and are the result of various actions by Western countries, including France. What’s to be done about it? I’ve no idea. Stop invading countries, stop being greedy, get on your bikes. Literally. (I said I wanted to write about bikes.)

Bikes don’t need much oil to operate them or make them, even less so if they are thirty years old. It would at least start to reduce our dependency on oil, which – unless you’ve lived in a cave for the past twenty years – is a big factor in this mess. And I doubt anybody, except Tony Blair and George Bush, would deny that.

Bikes won’t solve the world’s problems, but they’re fun, healthy, cheap, and don’t require foreign oil. And better than driving around in an air polluting VW Golf all day. And if you get one as sexy as this, you’ll look very cool indeed. Allez France! 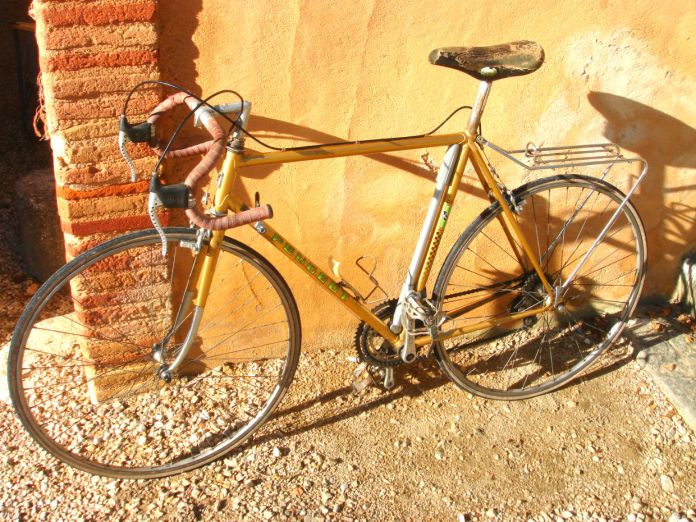