Being a holiday rep in the Dordogne has many advantages – nice climate, an endless supply of foie gras, lovely scenery, plus free comedy provided by irate English and Dutchmen parking their 40-foot motorhomes in cramped supermarket car parks. However, the best part so far has been bathing in a French half bath.

When we first moved here at the beginning of May, we were a little concerned about the apartment we’d been allocated. The bedrooms smelt of cod, the lounge had the character of a hospital waiting room, and the kitchen equipment amounted to no more than a few chipped plates, an assortment of blunt knives, and a deep fat fryer. All of which gave me the sudden vision of us spending the summer eating calamari and chips at a plastic table.

‘Feels like I’ve just walked into a day centre,’ I said to Elizabeth. ‘How on earth am I going to make salmon en croute using a milk pan and a whisk?’ The only other implements I’d seen.

‘We might have to do a spot of shopping,’ she agreed discovering a rusty fork in the sink before we moved off to inspect the bathroom.

‘Oh my God,’ I yelled once we’d found the light switch, expertly taped up with sellotape. ‘There’s no bath!’

This was devastating. I could live without pans, ham and cheese is fine, but not without a bath. ‘Sans bain,’ I shouted. ‘Or is it sans baignoire?’ I momentarily considered looking at the strange, almost deformed, bath like structure. (La baignoire being the actual tub, le bain being the actual concept, as in ‘I’m going to take a bath.) Either way it wasn’t good news.

‘You know how I feel about showers,’ I started complaining to Elizabeth. ‘I hate showers. You wouldn’t go to a cinema and expect to watch a film standing up, would you? Or have your hair cut? Why should I be expected to wash standing up. Or shave. I always shave in the bath.’

She’d heard this rant before. In each place we’d ever gone in fact that didn’t have a bath. ‘Showers are for morons,’ I’d continue. ‘Imbeciles. I mean who invented showers. A real idiot in my book…’

The fact is I like to bath. It relaxes my mind, my body, my soul. The hotter the better. The best temperature being equivalent to that of a 5-minute old cup of coffee. Cool enough to sip, but still hot enough to burn your mouth if you drink it too quickly. After fifteen minutes of deep immersion at this temperature I feel myself cooking. Poaching myself like an egg ready to be served up with a slice of smoked salmon and toasted brown bread.

I’m not exaggerating either. I get some insane thrill from boiling myself like a lobster and then spending the next hour drinking from a tap desperately trying to prevent massive organ failure due to chronic dehydration. It’s an addiction I’ve had since I can remember and it seems no sign of abating. So the thought of going the whole summer without one was distressing.

So one day last week, fed up with trying to read and shave in the shower, I decided to give the half bath a go. The results were incredible.

Not only was the water super hot (and free), but the bath itself was not just a sawnoff version of a normal bath as I’d originally thought. It had a seat, plus its increased height meant that when filled the occupant is fully immersed like a normal bath. They built skyscrapers in New York along the same lines. If you run out of space, build up. Ditto the French half bath.

I even found I could stretch out my legs by simply moving my backside down towards the front, placing my heels flat on the opposing wall and allowing my shoulders to sink into the warm water.

So if you’re ever in France and your apartment/hotel room is advertised as “with bathroom plus half bath”, don’t be put off. Fill it up, dip in and relax comme ça. 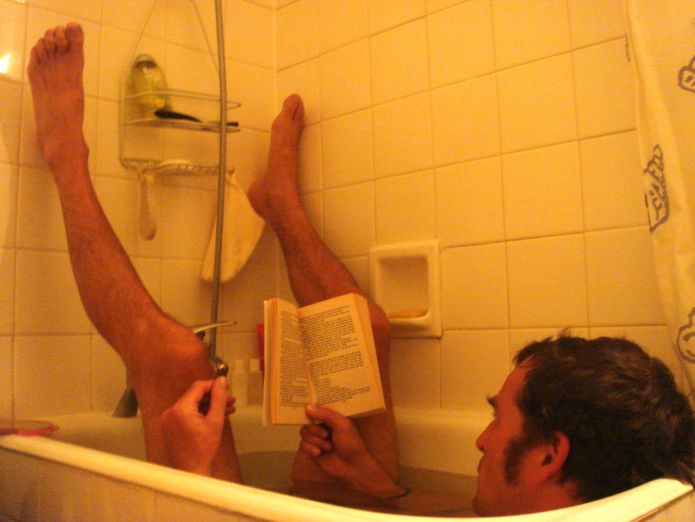